Get off-grid & emergency power from this solar briefcase & battery packs 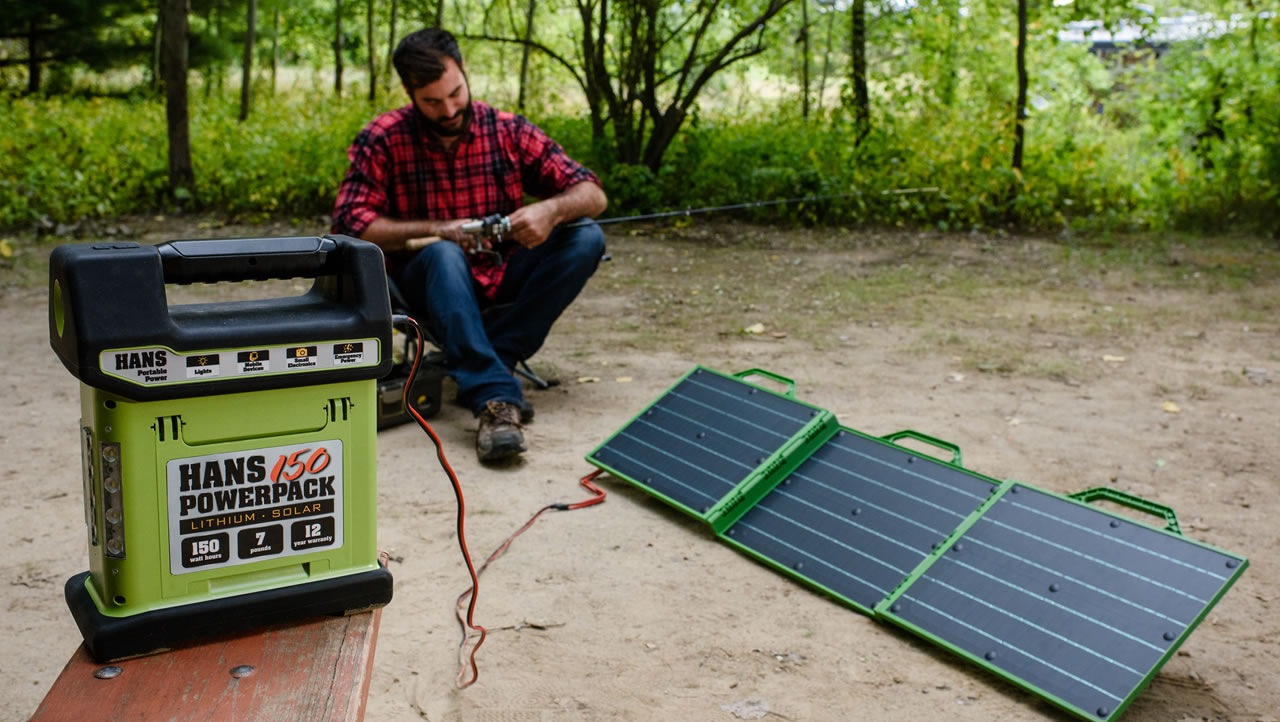 Get off-grid & emergency power from this solar briefcase & battery packs

The HANS Solar Briefcase and PowerPack systems do double duty by supporting the Billions in Change movement.

We’ve come a long way in terms of remote and emergency power options over the last ten years, having gone from relying almost completely on gas or diesel generators and boxes of single-use batteries to solar chargers and rechargeable batteries for supplying electricity, and from gas lanterns to LED lights for illumination, which is good for the average camper or emergency preparedness kit. When I think of how many ‘disposable’ batteries I used over the course of my life, before I started buying rechargeable batteries and powerpacks that I could recharge with solar power, it adds up to a staggering amount of waste.

Having access to not just cleaner power sources, but also ones that can be ‘refueled’ with solar energy when needed, is not only a greener way forward, but is also a great asset when going off-grid for recreation, as it allows people to enjoy some of the creature comforts of home while camping or picnicking. But for others, who live in parts of the world with little to no access to power, whether it’s because of lacking infrastructure or from the impacts from disaster or war (or just a lack of money to acquire it), having a solar charger and a battery to store the electricity in can make a huge — even a lifesaving — difference.

A number of different efforts have been working to build and sell products like that to those of us in the First World in order to help underwrite those projects, to raise awareness of the issues of global energy poverty, and to fund the development of rugged and affordable off-grid power solutions for the developing world. One such example is the Billions in Change movement, which was founded by Manoj Bhargava, the billionaire creator of the 5-hour ENERGY products who has pledged to give 99% of his wealth “to build a better future by creating and implementing solutions to serious problems facing the world in the areas of water, energy and health.”

We covered a previous innovation that came out of the Billions in Change effort, the “Free Electric” bicycle that can generate electricity for home use, which looks like it will now only be available in India, but as of yesterday, there are now a few other off-grid energy products available. The Bhargava-backed Stage 2 Innovations and HANS Power have just announced the launch of two battery packs and a folding 60W “Solar BriefCase” that are designed to be lightweight, rugged, and a dependable source of electricity.

The HANS PowerPack comes in two sizes, the 7-pound 150 model with 10Ah of capacity in lithium-ion cells, and the 9-pound 300 model with 20Ah of capacity, both of which integrate a 4.5W solar panel on the back for self-charging, as well as having a dedicated solar input for an external panel, plus a port for charging them via a wall outlet. Both models have 5W of LED lighting built into them, plus a 12V port and 5V USB outlet, and are rated for 1000+ charging cycles, with a 12-year warranty on each. The PowerPacks are built from a tough polycarbonate to stand up to bumps and drops and other wear, and are water- and heat-resistant, although not fully weatherproofed. A 12V port accessory that contains two USB output ports expands the number of outlets, for a total of 3, which might be too few in this day of USB-powered everything, and there is no onboard inverter for powering AC devices.

The HANS Solar Briefcase is a folding 60W solar charger that can be used to speed up the charging of the PowerPacks (their onboard 4.5W solar cells take between 33 and 66 hours to fully charge them), and is designed to be able to be used alone, or chained to additional units for even quicker charging. The 9-pound unit has built-in legs to help position the solar cells toward the sun, handles for ease of carrying, and folds down into a 19.5″ x 16.4″ profile just 2 inches thick. The company claims its Solar Briefcase can charge the PowerPacks in as little as 3.5 hours for the 150 and 5 hours for the 300 models.