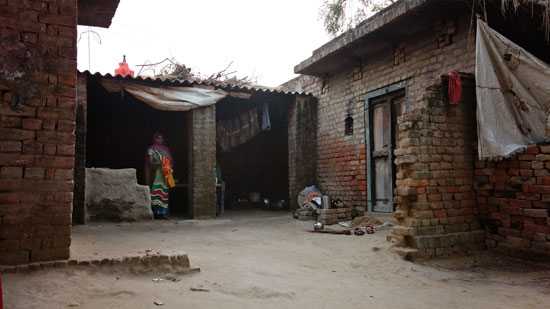 Rajkali lives in the small village of Tomar Purwa in the state of Uttar Pradesh, about 75 miles from the state capital of Lucknow. She was married for about 40 years before her husband passed away from illness in fall 2016, just a few weeks before we interviewed her. She has eight grown children, and three of her married sons and their families live with her—a total of over 20 people in a four-room brick house with a concrete and thatched roof. Each room is about 100 square feet and sleeps 5-6 people on the floor.

Rajkali earns a livelihood by farming her land (about one-third of an acre) and running a small neighborhood sundries shop. There she sells cookies, small amounts of dry groceries, pens and pencils, bananas, snacks. The packaged goods are supplied from distributors and perishables are bought from markets 2-5 miles away. She visits the markets daily by walking 10-15 minutes to the nearest paved road, and then by catching a public bus. 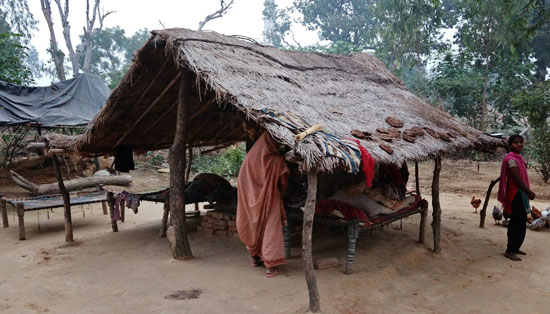 A cot is set up next to her shop, where one of her family members sleeps. According to our researchers, “There’s usually no difference between where people work or sleep. As long as there’s space, people basically sleep wherever.”

She also rents out her cattle for transporting brick from a nearby kiln. Her sons work in fields and also do other jobs in the village. One drives a tractor, one is a kiln worker, and her youngest son, who doesn’t live with her, works in a helmet factory in Delhi.

She says she finds great benefit from the Hans Free Electric™ bike during evening hours, when it provides crucial light after sundown. Specifically, the light allows the children to study and it helps her while cooking and doing other household chores that cannot be done during the day. She also uses the bike to charge a portable lantern, which allows her to keep her shop open well after dark.

Rajkali’s feedback on the usefulness of such a lantern prompted our Stage 2 engineers to redesign the Hans Free Electric™ battery as a portable power pack with built-in lights and various outlets for charging different devices. 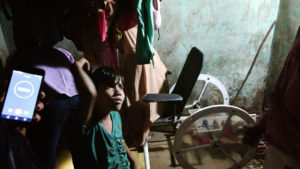 Before the bike, her household was using a liter of kerosene every 2-3 days, which translates to about 10-15 liters per month. Her neighbors who can’t afford kerosene often use earthen lamps with mustard oil; some even use candles.

Rajkali, her newlywed daughter-in- law, and her grandchildren pedal the bike for 60-90 minutes per day. The grandchildren find it to be a fun activity.