For the past 20 years, Shyamla Dwivedi has operated a health clinic known as an Auxiliary Nurse Midwife (ANM) Center, where she gives prenatal care to pregnant women, delivers babies, and provides healthcare to infants and young children. Shyamla performs anywhere from five to 12 deliveries per month and has one assistant, who also helps keep the Center clean. Because medical needs are unpredictable, Shyamla lives at the Center and is always on call should an emergency arise.

Shyamla’s Center is located in Ramgarh, a rural village in Amethi, Uttar Pradesh. Funded by the government, the Center also serves three other villages nearby. Shyamla is often in the field during the day to visit patients, assist with government health education programs related to vaccines, and to speak with women about health issues, specifically the importance of delivering their babies at the Center instead of at home. The women Shyamla sees are very poor, and by earning their trust, the number of home deliveries has declined substantially.

Shyamla’s permanent home, where her husband and two children live, is in Sultanpur, a city about 20 miles from the village. Her children stayed with her at the Center when they were young, but are now adults. Her son is a schoolteacher and her daughter is a nurse. Her husband works in a bank. Shyamla goes home infrequently as she has to take leave of her job in order to do so.

The ANM Center is quite small, consisting of only two rooms. One is a labor and delivery room, and the other serves as a waiting room and administrative area. The clinic is connected to electricity, but supply is erratic. She keeps a portable battery-powered “emergency light” which she charges when electricity is available. Otherwise, she uses kerosene lamps. 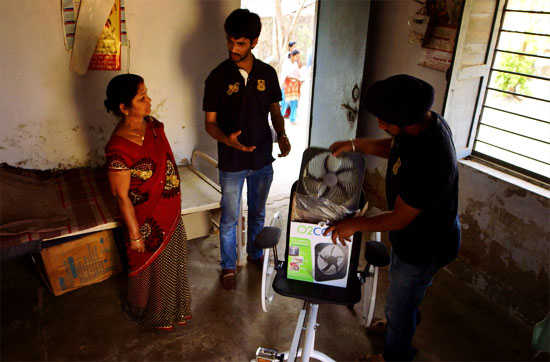 Shyamla received a Hans Free Electric™ bike as part of the March 2016 pilot study. Working primarily alone, she herself was responsible for pedaling, which she would do for about 30 minutes a day. Her biggest challenge was finding the time. She also reported problems charging the battery.

Shyamla’s feedback led our engineers to make significant improvements to the battery. First, they adjusted the low-voltage disconnect so that the battery would shut off before it was fully discharged. Charging a fully discharged battery is much more difficult (and takes more time) than charging one that still has some charge remaining. Second, Shyamla’s regular use of an emergency light, which she charges when electricity is available, led our engineers to develop an entirely new and portable battery pack equipped with built-in lighting.